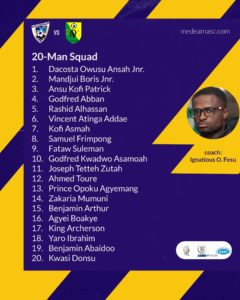 The gaffer has left out midfielder Rashid Nortey – who picked up a minor injury during the side’s penultimate training session on Sunday.

The highly-rated midfielder will missed the home match against Gold Stars at the Akoon Community Park on Tuesday.

The gaffer has kept faith with goalkeeper Owusu Dacosta Junior – who conceded four goals in Bechem while Ivorian Mandjui Boris Jnr is also in the squad.

Vincent Atingah returns to the squad after serving his suspension and will most likely partner youngster Kofi Asmah.

There are places for youngster Godfred Abban, Rashid Alhassan and Ansu Kofi Patrick.

Captain Joseph Tetteh Zutah as well as winger Zakaria Mumuni and strikers Amed Toure and Prince Opoku Agyemang are in the squad.

Former Medeama Under-20 captain King Archerson makes the squad for the second time while Benjamin Arthur is likely to take the place of suspended Baba Musah Abdulai.

Godfred Kwadwo Asamoah, Agyei Boakye and Kwasi Donsu are the others midfielders named in the 20-man squad.