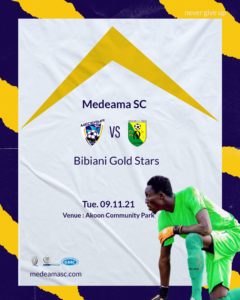 The game was rescheduled to Tuesday November 8 following a late approval from the Ghana Football Association’s Club Licensing Board on Monday.

The Mauve and Yellow will now play infront of their home fans for the first time this season as they host the Western North side at the Akoon Community Park.

Medeama were hammered 4-0 at Bechem United in their opening fixture but attributed the heavy defeat to late Covid-19 jab taken two days before their match against the Hunters at the Nana Gyeabour Park in Bechem.

It’s a battle of two young tacticians in Ignatius Fosu and Michael Osei for the cracking fixture at the Akoon Park in Tarkwa.

The win will serve as a massive boost to the side ahead of their trip to Tarkwa to battle the highly-fancied side.