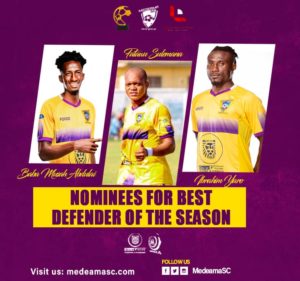 Three outstanding players have been shortlisted for the Best Defender of the Season in the inaugural Luxury Touch Hotel – Medeama Awards night scheduled for Friday in Tarkwa.

Versatile Ibrahim Yaro, centre-back Baba Musah Abdulai and left-back Fatawu Sulemana are in the hunt for the top individual award on the night.

The awards night of pump and pageantry will attract the creme de la creme at the plus Luxury Touch Hotel in Tarkwa on Friday night.

The three nominees distinguished themselves in the year under review with one walking away with the award.

It’s been a roller-coaster displays for the trio – who are neck-in-neck in the race for the Best Defender of the Season.

Take a cursory look at their performances in the 2020-21 season.

The versatile defender operates both as a centre-back and a right-back.

He clocked 17 appearances, won two Man of the Match Awards (against Kotoko and Ebusua Dwarfs and scored a goal.