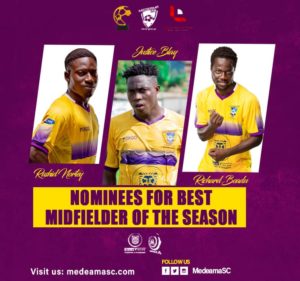 Four Medeama stars are in the frame for the Player of the Season Award in the first-ever Luxury Touch Hotel- Medeama SC gala night on Friday October 22, 2021 in Tarkwa.

The Planning and Organizing Committee has announced the nominees in the seven category award for deserving players.

The Mauve and Yellows enjoyed a decent campaign last season, finishing 5th on the Premier League table and ending the FA Cup adventure as semi-finalist.

Players who excelled during the year under review will be honoured at the famous Luxury Touch Hotel in Tarkwa.

The finest world class hotel in the mining town will host the event which is expected to attract the creme de la creme.

The award ceremony that marks the end of Medeama season and usher in the new 2021-22 season.

Here are the nominees for the various categories.

Discovery of the Season

Best Defender of the Season

Best Midfielder of the Season

Best Forward of the Season