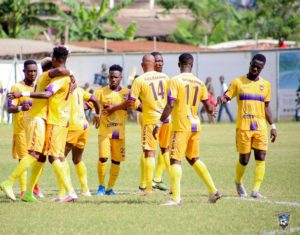 Medeama and Berekum Chelsea settled for a pulsating 0-0 draw in a penultimate pre-season friendly match on Sunday.

The two teams sold out an entertaining clash as their continue their build-up to the start of the 2021-22 Ghana Premier League match.

Medeama coach Ignatius Fosu is trimming the rough edges of the team ahead of the start of the new season.

This is the third pre-season friendly against Premier League side since the team moved to Kumasi for the final phase of preparations.

The Mauve and Yellows recorded a 2-2 draw at AshantiGold in Obuasi which followed the side’s 3-2 defeat to King Faisal at the Paa Joe Kumah Park at the Kwame Nkrumah University of Science and Technology.

The team is expected to return to Tarkwa on Monday to continue their pre-season ahead of the start of the new campaign on the weekend of October 29-31.