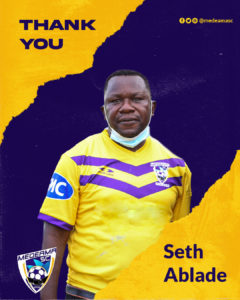 Ablade joined the Mauve and Yellows on a three-year deal back in February 2021.

But after the seven months two parties have parted ways following a discussion on the direction of the club.

The 37-year-old took over the reigns from Augustine Evans Adotey who left the club in 2017.

Medeama would like to thank Mr Ablade for his immense contribution and will always be welcomed back into our club in future.