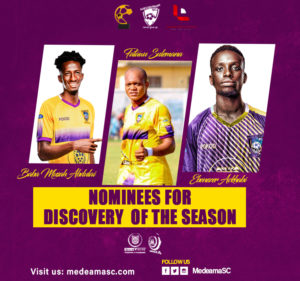 Three players have been shortlisted for the Discovery of the Season ahead of the Luxury Touch Hotel – Medeama Awards night on Friday.

Speedster Ebenezer Ackahbi, defenders Baba Musah Abdulai and Fatawu Sulemana have been nominated for the award.

Ackhabi, has been a toast of fans with his immense talent. The youngster impressed heavily in the year under review and highly regarded as one of the future stars of the club.