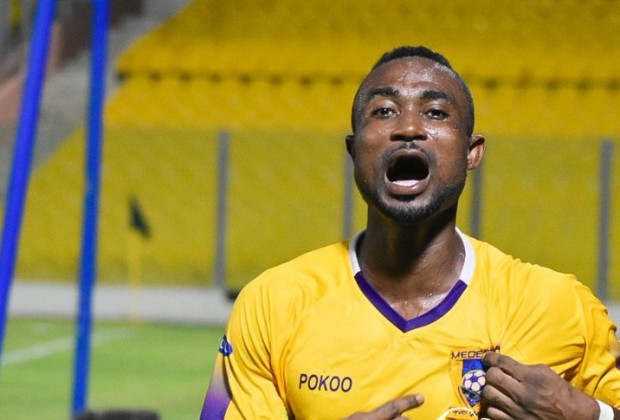 Medeama striker Prince Opoku Agyemang is back to the office with a bang after scoring four goals in six matches since his return from South Africa.

The 28-year-old goal, machine is continuing from where he left off to Cape Town City FC, starting to turn the numbers in style for the Mauve and Yellow.

The former New Edubiase striker scored on his return to the domestic top-flight in the 2-0 win over Techiman Eleven Wonders.

He went on to score the equalizer for the two-time FA Cup holders in their 1-1 stalemate at Berekum Chelsea.

However, he drew blank against Great Olympics in the side’s 1-0 defeat in the capital and again failed to score after climbing off the bench in the side’s 2-1 win over Legon Cities at home – a fixture his strike partner Amed Toure bagged a brace.

Nicknamed “Prince of Goals” Agyemang returned to starting line-up and  punished Dreams FC in style after scoring in the  2-0 win the side at home.

Opoku Agyemang is back to the Ghanaian top-flight after spending three months on loan at  South Africa’s Cape Town City FC.

He was recalled by Medeama following the side’s tetchy start to the season.

The home-based striker is back with a huge bang and has found his scoring boot again as he continue to churn out impressive displays for the side.

His partnership with Ivorian-born Amed Toure could proper the side to their first Premier League crown.

Medeama are top of the league table for the first time this season after a well deserved 2-1 win at Asante Kotoko on Saturday.