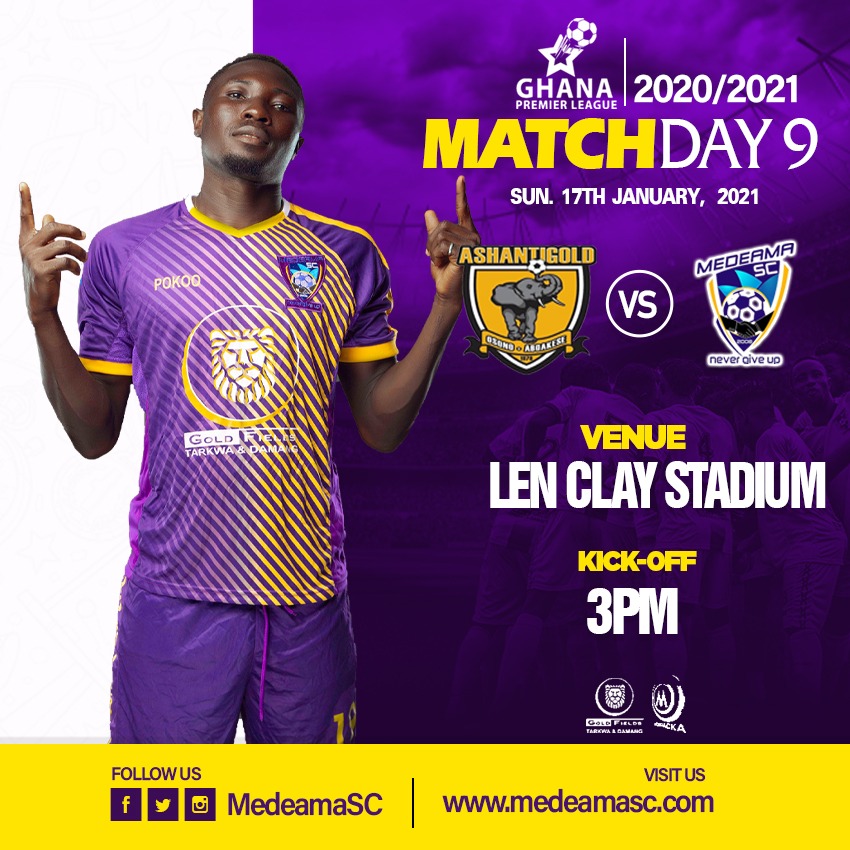 Medeama will be seeking just their second win at the Len Clay stadium since joining the Ghana Premier League with a difficult tie at leaders Ashantigold on Sunday.

The Mauve and Yellow  are travelling to an unfavourable grounds as they have managed only one win there since joining the Ghana Premier League.

Their only victory over AshantiGold at the Len Clay Stadium was in 2012. Since then they have lost three and drawn just once out of their visits to Obuasi.

First choice goalkeeper Eric Ofori Antwi is not available for this fixture due to illness paving way for Frank Boateng to man the posts against his former club.

Coach Samuel Boadu is expected to keep faith the squad that managed a 2-1 win over Aduana Stars last weekend,

AshantiGold SC are occupying the summit of the Ghana Premier League standings for the first time this season after eight rounds levelled on points with Bechem United.

The Gold and Black outfit will be looking at consolidating their top spot on Sunday when they tackle Medeama SC at the Len Clay Stadium.

Milovan Cirkovic’s men made it to the top of the log last weekend after coming from behind to beat Great Olympics 2-1 at the Accra Sports Stadium.

AshantiGold remain undefeated at home in the premiership this campaign as they have won three of the four games with the other being a draw.

They have scored 13 goals at the Len Clay stadium and conceded 6 goals failing to keep a single clean sheet in the process.

Midfielder Appiah McCarthy has scored three goals from free kicks in Obuasi this season making him a player to watch in this game.

Centre back Richard Osei Agyemang is returning from suspension and is available for Sunday’s crucial fixture.

Amos Addai and Dacosta Boadu are all doubtful for the match.

Medeama SC face a stern test in Obuasi on Sunday as they look to record back-to-back wins for the first time this campaign after opening 2021 with a victory.

The Mauve and Yellows beat Aduana Stars 2-1 last weekend to make it two wins from eight matches since the season began.

Medeama are 10th on the league standings with 10 points and a win on Sunday could see them in the top six places.