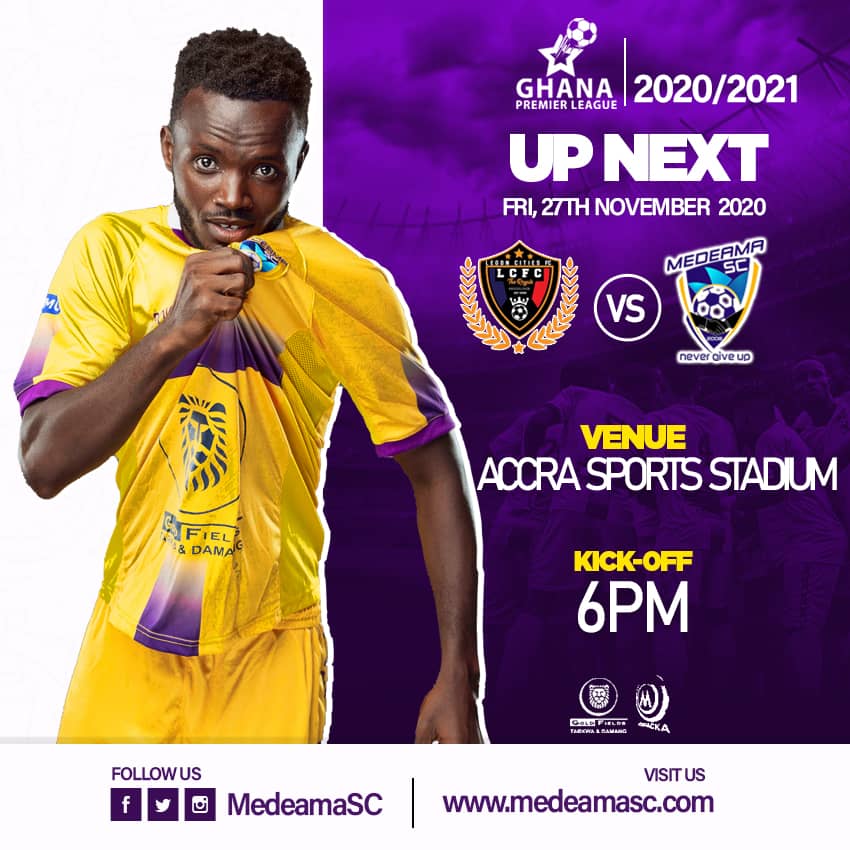 Medeama travel to Legon Cities in desperate search for the side’s first win of the season at the Accra Sports stadium on Friday night.

It’s a match that sees Samuel Boadu’s Medeama go toe to toe with Bashir Hayford mega rich club in a tie that will provide both coaches with the opportunity to make an early statement of intent this term.

Cities drew 1-1 with Berekum Chelsea but got thumped by city rivals Great Olympics 3-0 – in a match which effectively ended the romance of Bosnian gaffer Goran Barjaktarevic.

The Wonder club bared their teeth in their previous Premier League outing against Legon Cities which saw the Accra side showcase the gap in quality that separated them from their city rivals last week after thumping them 3-0.

The Royals come up against a Medeama side which is desperate for oxygen after struggling in their opening two matches.

Bashir Hayford’s side suffered a setback in their pursuit of a top-flight immortality at last week while Medeama are looking to bounce back from their 2-1 defeat at Dreams FC.

It’s a massive game for the two teams who are desperate to rewrite the wrong in the early stages of the season.

Legon Cities could welcome record-signing Asamoah Gyan into their fold with Medeama defender Ali Ouattara fit to play against the Royals in the capital on Friday night.

Cities have brought in a number of stellar players including the iconic Asamoah Gyan as well as former Aduana Stars midfielder Elvis Opoku and former Techiman City star Baba Mahama.

But the team is yet to jell after struggling in their opening two matches.

Medeama on the other hand, were shell-shocked at home after being held to a 1-1 draw by Great Olympics in Tarkwa two weeks ago.

Coach Samuel Boadu only returned to the touchline in their defeat at Dawu after missing the season’s opener at home to the Wonder Club.

Whatever goes down on Friday night, Medeama must find a way out and win to restore the genuine-title contenders tag.

Cities on the other hand, are also in desperate need of of revival after picking just a point from two games.

Medeama beat the same side 2-0 at the Accra sports stadium in the truncated 2019-20 season.