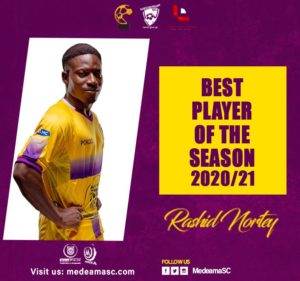 Midfield maestro Rashid Nortey has been crowned Medeama’s Best Player for the 2020-21 season after an explosive form last term in the Luxury Touch Award last night in Tarkwa.

The dribbling wizard was also crowned Best Midfielder of the season after a fine campaign last term.

Nortey made a total of 31 appearances in the Ghana Premier League during the season under review.

He scored twice and assisted 4 goals towards the Mauve and Yellows campaign which saw them finish 5th.

The midfield stalwart earned his maiden Ghana call-up in May 2021 following his impressive form for the Tarkwa-based side.

He debuted for the West African powerhouse during an international friendly which ended in a 1-0 defeat against Morocco in June 2021.

Youngster Ebenezer Ackhabi was adjudged Discovery of the Year while Baba Musah Abdulai clinched the Best Defender of the Season.

Prince Opoku Agyemang was crowned Best Forward of the Season while Joseph Tetteh Zutah’s exquisite lob against Eleven Wonders was adjudged Goal of the Season.

Captain Joseph Tetteh Zutah was awarded a Meritorious Award for his long-standing dedication and commitment to the club.