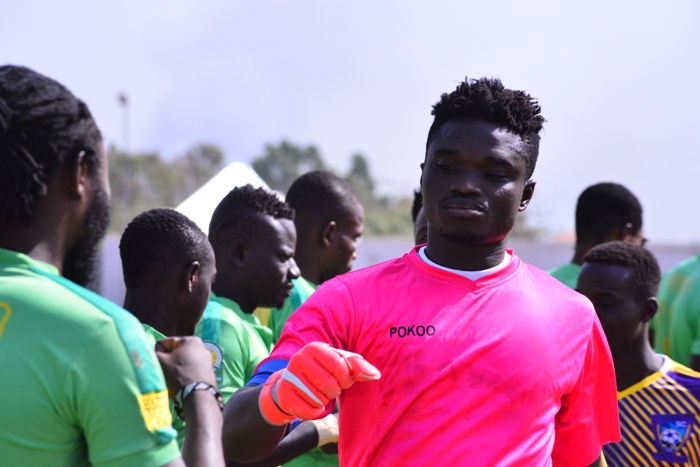 Medeama goalkeeper Eric Ofori Antwi is in line to make Ghana’s squad for the 2022 Africa Cup of Nations qualifier against Sudan as a reward for his brilliant displays on the domestic front, GHANAsoccernet.com has reported.

The 25-year-old has been the most outstanding goalkeeper in the domestic flight for the Mauve and Yellows this season and could earn a deserved call-up into the team.

Antwi’s form on the local and international front has elevated him to the position where it will be difficult for current Ghana coach Charles Akonnor to ignore him.

The immense quality of the last line of defense has been hugely highlighted in the local media as he inches closer to his first senior call-up.

The former Amidaus Professionals and Asante Kotoko shot-stopper has been the most consistent goalkeeper in Ghana over the past three seasons.

Black Stars coach Charles Akonnor is considering naming the highly-rated goalkeeper in his squad for the qualifier against Sudan at the Cape Coast Stadium on March 27.

The progress of Antwi has been remarkable having featured for both the country’s Under-20 and 23’s – and appears destined to complete the cast with a call-up into the senior national team.

Medeama’s fairly run in the 2019/20 campaign has been largely attributed to him for his remarkable and outstanding displays in post.

Of all the goalkeepers on the domestic front being considered including Hearts of Oak’s Richard Atta, Ashantigold’s Frank Boateng and Kotoko’s Felix Annan,  Antwi stands tall.

Lightning off his line, capable of wonderful saves and mega-consistent, it’s no wonder several Premier League rivals nurture the ambition of taken him from Tarkwa.

Antwi has built his reputation from the full glare of the media, flinging himself about heroically on several occasions.

He has good height, fantastic reflexes and a superb goalkeeper who has been a key cog in Medeama’s surging run on the domestic front.

Watchers say it will be unjust and suicidal if he is overlooked for the 2022 Africa Cup of Nations qualifier against the NorthEast African side on March 27 in the coastal town of Cape Coast.

The chips have fallen in place for the celebrated former Ghana Under-20 shot-stopper to have a goal with the Black Stars.

He played for Ghana as the West Africans clinched bronze at the 2013 FIFA U-20 World Cup in Turkey.

He was again the first choice for Maxwell Konadu as Ghana played at the 2019 WAFU tournament in Senegal.

The statistics and form weighs largely in his favour as Ghana coach Charles Akonnor prepares to names his final squad for the qualifier next week.

If, as anticipated, Antwi is handed a debut call-up for the qualifier against Sudan, it will be viewed as a natural progression for the hugely talented shot-stopper,  having featured for the country’s Black Satellites, Black Meteors and Local Black Stars.