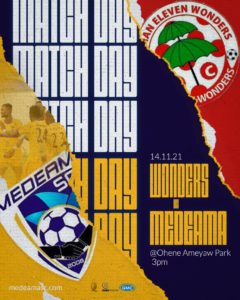 Medeama take on Eleven Wonders in Techiman in a crucial Ghana Premier League match on Sunday.

The two teams, who have endured a difficult start to life in the Premier League this season, will go at each other at the Ohene Ameyaw Park.

It’s a battle of two coaches who have had a feel of the two Premier League teams.

The two coaches will aim for their first win of the season with Wonders largely viewed as the favourites at home.

Medeama are yet to win after drawing 1-1 at home to Western region rivals Bibiani Gold Stars at the Akoon Park on Tuesday.

Wonders managed to sniff a point at Berekum Chelsea but that followed their 1-0 defeat at home to AshantiGold.

Both teams are tied on 1 point each from their opening three matches but Medeama are rooted at the bottom due to less goal difference.