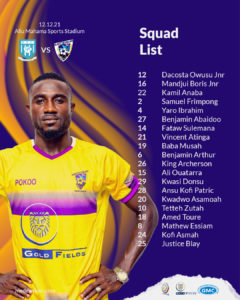 Coach Umar Abdul Rabi has named a 20-man traveling squad for the match day-7 fixture of the Ghana Premier League against Real Tamale United on Sunday.

The Mauve and Yellows will be aiming to cause an upset in Tamale when they play as guest of the Pride of the North.

Medeama are back on the road for the second successive time after their league match against Hearts of Oak was postponed.

They drew goalless at King Faisal in Kumasi two weeks ago and will be aiming to cause an upset in the Northern region.