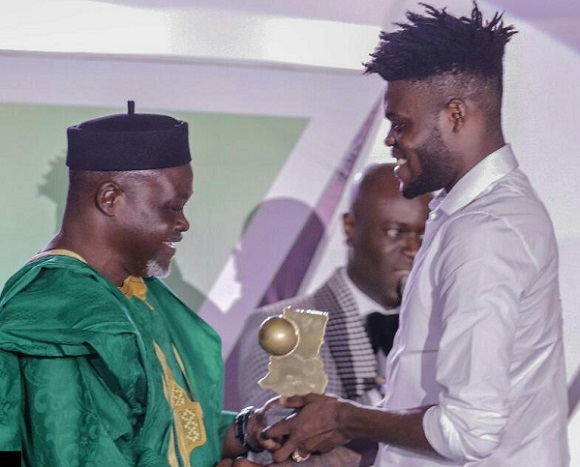 Atletico Madrid midfielder Thomas Teye Partey has set his sights on winning the biggest prize in European football ahead of the 2018/2019 season after being crowned the Ghanaian Footballer of the Year at the maiden edition of F360 Ghana Football Awards last Sunday.

Partey came close to winning the UEFA Champions League trophy two seasons ago after making a cameo as Atletico lost to rivals Real Madrid in the final.

Speaking to the Daily Graphic shortly after edging out Swansea star Jordan Ayew and three others to win his second award of the night, Partey disclosed that winning the UEFA Champions League had been declared the main target of Diego Simeone’s Atletico.

The Black Stars midfielder said the award presented to him by boxing legend, Azumah Nelson, would motivate him to improve on his performances last season where he made 52 appearances and scored five goals.

“I want to achieve more than I accomplished last season, try to win something for my team because we hope to win the Champions League which is our main target. Without hard work, we will not be able to do that, so we just have to start working from now,” said Partey who received the award in the company of his parents.

The 25-year-old, who two months ago won the SWAG Male Footballer of the Year prize, distinguished himself predominantly for both Atletico and the national team. His club finished second behind Barcelona in the Spanish La Liga and was a regular for Kwasi Appiah’s Black Stars with some fine performance, including netting his first career hat-trick in Ghana’s 5-1 win over Congo in a 2018 World Cup qualifier on September 5, 2017.

He also captained the Black Stars in recent friendlies against Japan and Iceland in the absence of regular skipper, Asamoah Gyan.

Last Sunday’s awards, organised by 24-hour sports channel Kwesé Free Sports and AE Media Communications, honoured 11 personalities and teams who were chosen after votes by an expert panel, including captains of the 16 Ghana Premier League clubs, the various national teams, journalists and the public.