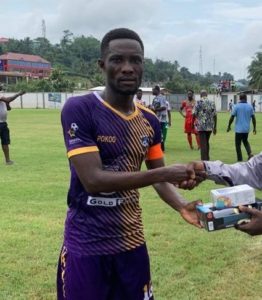 Captain Joseph Tetteh Zutah was voted Man of the Match in Medeama’s 2-0 win over Karela United in a rescheduled Ghana Premier League match on Monday.

Zutah was outstanding for the Mauve and Yellows as they strolled to the late victory at the Akoon Park.

Substitute Justice Blay opened the scoring for the home side on 72 minutes before youngster Ansu Kofi Patrick doubled the lead five minutes to regulation time.

Medeama had to sweat for the win after the final 20 minutes of the game was rescheduled to Monday following a heavy downpour on Sunday.

Coach Umar Abdul Rabi’s charges had to dig deep and secure the side’s first win of the season.