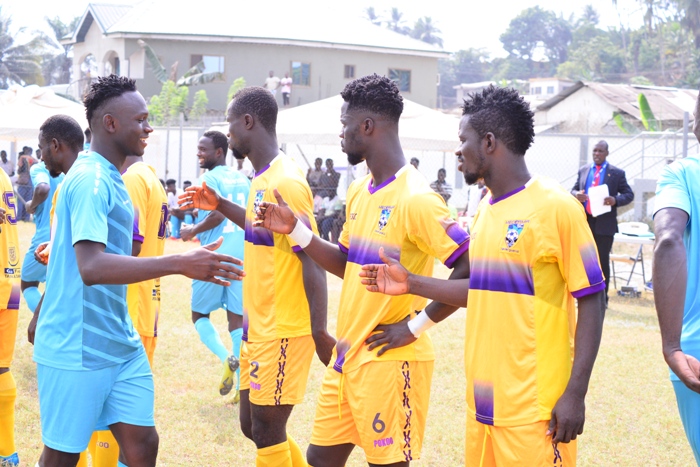 Medeama produced a 2-0 win over Techiman Eleven Wonders to maintain their grip at the top of the Ghana Premier League table.

Midfielder Kwasi Donsu and forward Isaac Agyenim Boateng scored in each half to give the host the deserved victory at the Akoon Park in Tarkwa.

Medeama coach Samuel Boadu made four changes to the squad that drew goalless at King Faisal in Techiman last weekend.

The gaffer shuffled his cards bringing on Richard Boadu who has served his suspension.

Sulemana Fatawu was brought on to replace Bright Enchil, who failed to pass a late fitness test.

Mershack Odoom enjoyed his first start of the season, operating from the right-back role.

The game lived up to its billing with some fantastic inter-positional play by both teams.

Donsu sprung from nowhere to rattle in a volley after beating the defensive network of the visitors to open the scoring.

It was his second goal of the current campaign.

Wonders produced scary moments for the host with Ibrahim Salifu becoming the tormentor in chief.

Together with Zakaria Abdul Muge, the duo thrilled fans with their sleek passing and attacking flair.

Just as the game appeared to be heading to a narrow victory, substitute Agyenim Boateng headed home the second goal from Eric Kwakwa’s cross.

The win ensures Medeama maintain their grip at the top of the table as they travel to Accra to battle Legon Cities on Saturday while Wonders welcome Ebusua Dwarfs on Sunday.