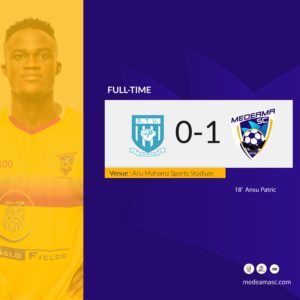 Medeama pulled the chestnut out of the blazing fire to beat Real Tamale United 1-0 to bag their first away win of the season on Sunday.

The win has lifted the visitors to 9th position with 9 points from 6 games, but  the home side remain 7th on the log with 10 points.

It’s a massive result for the Mauve and Yellows, which is beginning to find its feet after a difficult start.

And the decision paid off with Ansu Patrick scoring his second goal for the side since joining from Berekum Arsenal.

The youngster slotted home from Amed Toure incisive flick to bag maximum points away from home.

David Abagna failed to come to the party this time around as his side struggled to contain a well disciplined Medeama side.

This is the first home defeat for the Pride of the North ahead of their next trip to Kumasi to battle Asante Kotoko.

Medeama have an outstanding match against Hearts of Oak but will have to tackle Legon Cities first in their next home match on Wednesday.