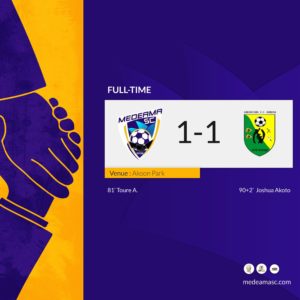 Substitute Joshua Akoto scored an injury-time for equalizer for new boys Bibiani Gold Stars to earn a priceless  1-1 draw at Medeama on match Day-2 of the Ghana Premier League match on Tuesday.

Amed Toure scored a goal of the season contender with a superb bicycle kick on 81 minutes to send the home fans into frenzy.

However, when everything appeared destined for a hard-fought victory, the visitors capitalised on a defensive howler from Fataw Sulemana to pull the trigger at the Akoon Park.

The Mauve and Yellows will down by after squandering several goal scoring opportunities.

The home side hit the woodwork in the first half with goalkeeper Yaw Ansah becoming a stumbling to an avalanche of goals.

Pressure will begin to mount on coach Ignatius Fosu following his side’s unflattering start to the season.

The two-time FA Cup winners lost 4-0 at Bechem United and has now followed it up with a 1-1 draw at home to the miners.

Medeama rocked-bottom after the latest setback.