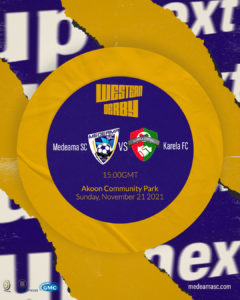 Medeama will be aiming for the first win of the season when we take on Karela United in the Western derby on Sunday.

This will be the first match for interim coach Umar Abdul Rabi – who has taken over the reigns from Ignatius Osei Fosu.

The gaffer has named midfielder Justice Blay in his 21-man squad for the regional derby against the Pride and Passion on Sunday.

The highly-rated midfielder is returning to the side for the first time in almost 8 months since suffered a serious injury against Legon Cities back in April.

The former Asante Kotoko loanee has been given all clear after being named in the weekend’s squad for the crunch tie.

Osei Fosu was show the exit door after just three games in charge of the Tarkwa-based side.

His side suffered their heaviest defeat in over seven years after losing 4-0 at Bechem United and drawing 1-1 at home to Bibiani Gold Stars.

He has been replaced by his deputy – who was signed three days before his dismissal.

The Mauve and Yellows are without a win in three games after picking a point at Techiman Eleven Wonders.

It’s been an unflattering start for the two-time FA Cup winners since the start of the season.

Medeama are still without injured midfielder Rashid Nortey while Mathew Essiam returns to the squad.

Midfielder Justice Blay returns to the squad for the first time since suffering a career-threatening injury during a league match against Legon Cities last season.

Karela United, who lie 6th on the table with five points, have managed one win and two draws since the start of the season.

They drew 1-1 at Ashantigold, drew 1-1 at home to Aduana Stars and beat Berekum Chelsea .

Medeama are 14th and a win over their rivals will take them joint 5 points on the table.