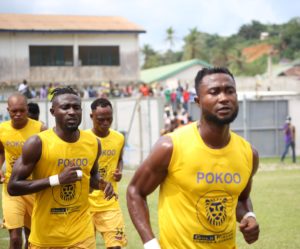 The Mauve and Yellows will be seeking a rare opportunity of causing an upset at the Nana Fosu Gyeabour Park on Sunday.

Despite finishing 5th last season, Medeama were just seven points shy off eventual winners Hearts of Oak, meaning the club can aim to go a notch higher this term.

Expectations at the club has been lowered after the club failed to win a silverware last season.

The last meeting between the two teams ended in a pulsating 0-0 draw at the same venue last season.

The home side appear favourites against Medeama at the Nana Fosu Gyeabour Park but would be wary of the threat posed by their opponents.

The last meeting between the two sides as the same venue ended in a 0-0 stalemate in a crunch Premier League tie last term.

However, Medeama have also boosted their squad with some fresh faces and will be aiming to cause an upset in Bechem.

This is the first match for new Medeama coach Ignatius Fosu – who has assembled a 23-man traveling squad for the trip to the Ahafo region.

The Hunters will be hoping to start the new season on a flying note following their struggles last season.

The club has re-signed midfield maestro Augustine Okrah and brought in Latif Anabila on a one-year loan deal from Asante Kotoko.

The club has been busy in pre-season playing series of friendly matches against fellow Premier League side Legon Cities, second-tier side Vision FC, Liberty Professionals and a host of low profile matches.