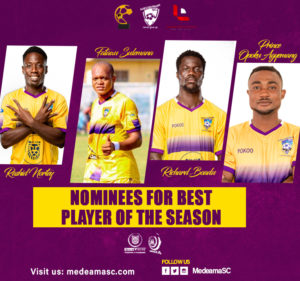 Four outstanding players are in the frame for the Best Player of the Season Award ahead of the Luxury Touch Hotel – Medeama gala on Friday.

Defender Fatawu Sulemana, striker Prince Opoku Agyemang and midfielders Rashid Nortey and Richard Boadu have been shortlisted for the top most individual award on the night.

The four players impressed superbly and have been nominated for the top award scheduled to take place at the famous Luxury Touch Hotel in Tarkwa.