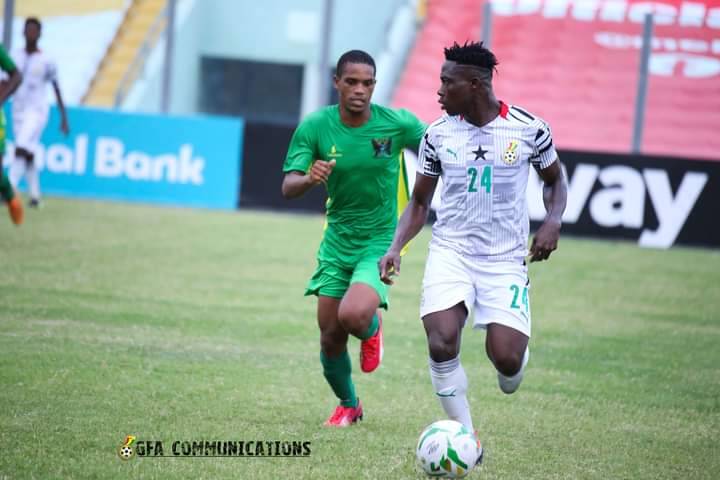 Medeama midfielder Justice Blay made his Ghana debut in the side’s 3-1 win over Sao Tome in the final 2021 Africa Cup of Nations qualifier against Sao Tome on Sunday.

The combative midfielder replaced China-based Mubarak Wakaso with 12 minutes left on the clock as the Ghanaians run riot at the Accra Sports stadium.

Blay was shown a yellow card on 84 minutes as the four-time African champions strolled to victory at home to end the qualification battle in style.

France-based Nicholas Opoku opened the scoring after jumping high like a bird inside the box to head in a corner kick from the right taken by Kudus Mohammed on 12 minutes to give Ghana the lead.

Crystal Palace striker Jordan Ayew increased the tally to two from the spot kick before Rahman added the third in the second half.

Goalkeeper Razak Abalora gifted the visitors a goal after Jokceleny Fernandes Carvalho capitalized on a goalkeeping howler to grab a consolation.

Ghana end Group C as winners on 13 points and qualify alongside Sudan who dished out a 2-0 win over South Africa.