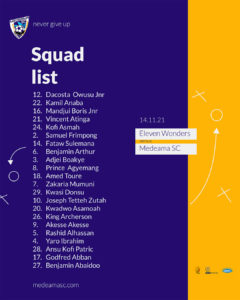 Ivorian goalkeeper Mandjui Boris, who enjoyed a tremendous debut for the side in the painful 1-1 stalemate against Bibiani Gold Stars, is expected to keep his starting role in the team.

Samuel Frimpong is expected to play at right back but a decision on Fataw Sulemana and Benjamin Abaidoo for the left-back role will have to be made by the gaffer.

Vincent Atingah and Kofi Asmah are in the frame for the centre-back roles.

Winger Zakaria Mumuni as well as forwards Amed Toure and Prince Opoku Agyemang are all in the squad.